It is said that every person who reads Montaigne looks into a mirror and sees himself.  “Every man has within him the entire human condition,” he said.  One 16th century admirer said that anyone reading Montaigne’s Essays might feel as if he himself had written it.  Over two centuries later Emerson would say that it seemed to him that he himself had written the book in some former life.  Stefan Zweig, World War II exile: “Here is a ‘you’ in which my ‘I’ is reflected; here is where all distance is abolished.  Four hundred years disappear like smoke.”  Of Montaigne’s timeless appeal, William Hazlitt says in his preface to The Complete Essays of Montaigne, “this is true fame.  A man of genius belongs to no period and no country.  He speaks the language of nature, which is always everywhere the same.”

Montaigne sought answers to the same questions that we all ask.  They were not so different in the sixteenth century – what to make of our experiences, how to endure grief and misfortune, whether it’s more enjoyable to have sex standing up or lying down (he preferred the latter), how to reassure a friend who thinks a witch has cast a spell on him (how many of us have tried to help a friend through that!), and what was going through his cat’s mind when he played with her.

Montaigne was intensely curious about human nature.  He believed that a man’s life is not the sum of his deeds, but of his thoughts.  He questioned and wondered ceaselessly about what people thought, how they felt, and why they did what they did.  And because he himself was the specimen closest to hand, he focused the microscope on himself, a subject on which, as he put it, he was “the most learned man alive.”  He deconstructed his mind, his feelings, his experiences in the most minute and astonishingly frank detail and delivered every bit of it to us in his Essays. 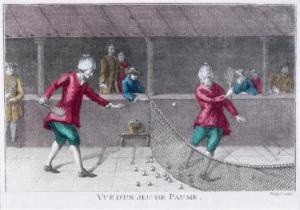 In his thirties, Montaigne became obsessed with death.  He lost his father in 1568.  The following year, his 27-year old brother Arnaud was struck in the head by a ball while playing jeu de paume,(an early version of tennis) and died a few hours later.   Montaigne’s first child died at the age of two months – he would bear the deaths of five of his six children.  The most painful loss of Montaigne’s life was the death of his closest friend, Etienne de La Boetie, at the age of 32.

With such frequent and ordinary examples passing before our eyes, how can we possibly rid ourselves of the thought of death and of the idea that at every moment it is gripping us by the throat.   At every moment let us picture it in our imagination in all its aspects.  At the stumbling of a horse, the fall of a tile, the slightest pin prick, let us promptly chew on this:  Well what if it were death itself? 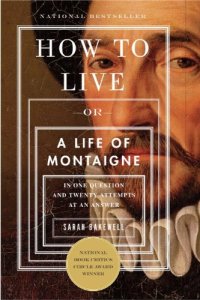 By his forties and fifties, however, Montaigne’s essays reveal a more sanguine state of mind.   Montaigne himself had come very close to death in a riding accident.  Carefully recorded by Montaigne, based on what he remembered and the observations of those around him at the time, it may be the most famous near-death experience in literature.  As recounted in Sarah Bakewell’s lively biography of Montaigne, “How to Live: Or A Life of Montaigne in One Question and Twenty Attempts at an Answer (a title which Montaigne would surely have approved), he remembered clearly what he felt when he regained consciousness.  His servants were carrying him back toward his chateau, his wife struggling over the rough ground to get to them.  His vision was blurry, but he could see that his clothes were bloody from the clots of blood he had vomited.  Inwardly, he felt very calm and langorous, vaguely aware of his body, but as though from a distance.

It seemed to me that my life was hanging only by the tip of my lips; I closed my eyes in order, it seemed to me, to help push it out, and took pleasure in growing languid and letting myself go.  It was an idea that was only floating on the surface of my soul, as delicate and feeble as all the rest, but in truth not only free from distress but mingled with that sweet feeling that people have who let themselves slide into sleep.

He felt no pain.  He was aware of but unconcerned by the efforts and anxiety of those around him.  As his servants settled him into bed, he recalled “ ‘I felt infinite sweetness in this repose, for I had been villainously yanked about by those poor fellows, who had taken the pains to carry me in their arms over a long and very bad road.’  He refused all medicines, sure that he was destined just to slip away.  It was going to be a ‘very happy death.’”  Later, however, when he had recovered, the servants and family members who had been present during and after the accident told a completely different story.  Witnesses said that he had “thrashed about, ripping at his doublet with his nails, as if to rid himself of a weight.  ‘My stomach was oppressed with the clotted blood; my hands flew to it of their own accord, as they often do where we itch, against the intention of our will.’  It looked as if he were trying to rip his own body apart, or perhaps to pull it away from him so his spirit could depart.”

Meticulously recreating his sensations, in dying, he now realized, you do not encounter death at all, for you are gone before it gets there.  You die in the same way that you fall asleep: by drifting away.  If other people try to pull you back, you hear their voices on ‘the edges of the soul.’  Your existence is attached by a thread; it rests only on the tip of your lips, as he put it. Dying is not an action that can be prepared for.   It is an aimless reverie.”   From then on, Montaigne refused to worry about death.   “In one of his last added notes, he wrote that death is only a few bad moments at the end of life, and not worth wasting any anxiety over.

It is impossible to read Montaigne’s account of his brush with death and not feel consoled.  It is equally impossible to read his essais and not be entertained and warmed by his friendly understanding, or, as journalist Bernard Levin said “not to put down the book at some point and say with incredulity, ‘How did he know all that about me?'”   Hazlitt captured this reader experience perfectly:  “Montaigne took the world into his confidence on all subjects.  Few men have left so much of their life behind them in their writing.”

“Cut these words,” Emerson said, “and they would bleed.”

3 thoughts on “The Man in the Mirror”

Follow A Commonplace for the Uncommon on WordPress.com
Auxiliary Memory

Past the Isle of Dogs

My adventures in self-publishing and other gibberish

In this world you will have trouble. But take heart! I have overcome the world. John 16:33

Just because you CAN read Moby Dick doesn't mean you should.

You Knew What I Meant